A proper evaluation requires measurements of a patient under at least two different conditions. The method used here is to examine a patient both at rest and during physical activity. This can be accomplished by having a patient engage in some activity where the general response of a healthy person is known.

Based on the patient's reaction, a more accurate assessment of ANS is possible. Intellewave uses a very popular method of ANS provocation - the Orthostatic Test, which is simply a transition from a supine to a standing position. Any physical or mental dysfunction will be exhibited as an inadequate ANS response during this test. 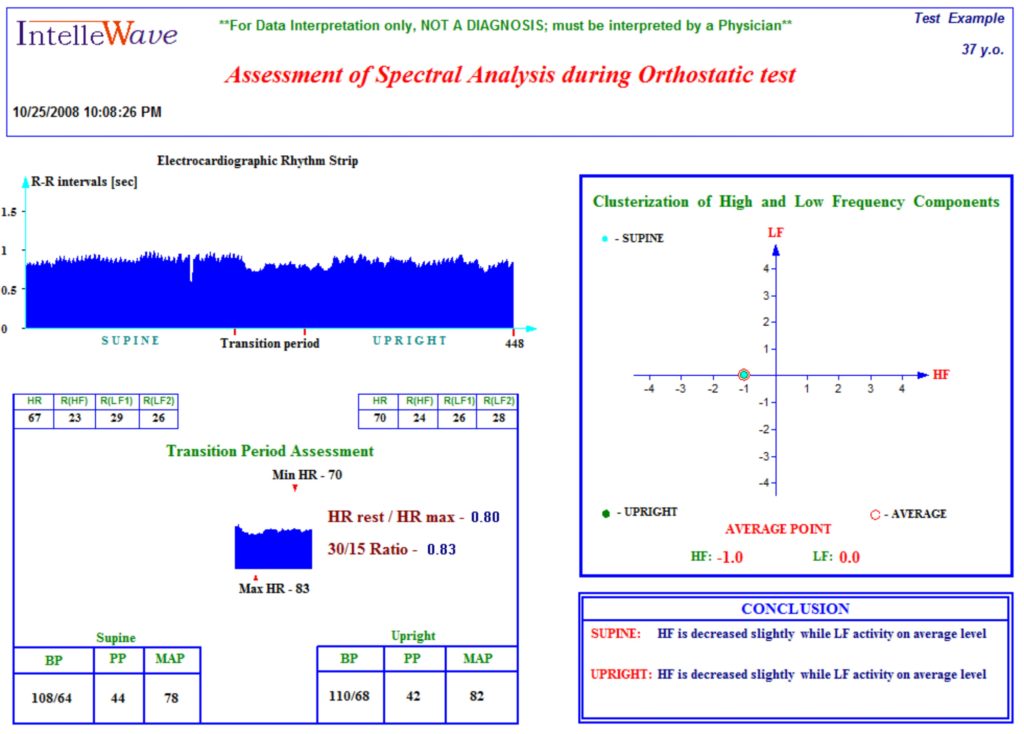 There are 3 result pages for Orthotest:

The goal of cluster analysis is to translate the results of the Power Spectrum analysis into the format of clusterization chart. A point on the chart reflects a distribution of intensities of Integrated HF and Integrated LF components of Spectral function.

The Spectrum page for Orthostatic test includes the description of 2 stages of the test:

1. Description of the Supine stage of the test is displayed on the left side of the panel

2. Description of the Upright stage of the test is displayed on the right side of the panel.

The maximums of the spectral function are shown by green triangles for each range if present.

This page displays a movable 3D chart of the Spectral function. Frequency (in Hz) is shown on the horizontal, or X-axis, and the amplitude of spectral harmonics (S, msec2) is shown on the vertical or Y-axis. Different frequency ranges are displayed in different colors. Two different stages of a test are displayed next to each other when the chart is viewed from the top.